The disinfectant spray will use UCF-developed cerium oxide nanoparticles that have been shown to have a wide range of therapeutic properties. 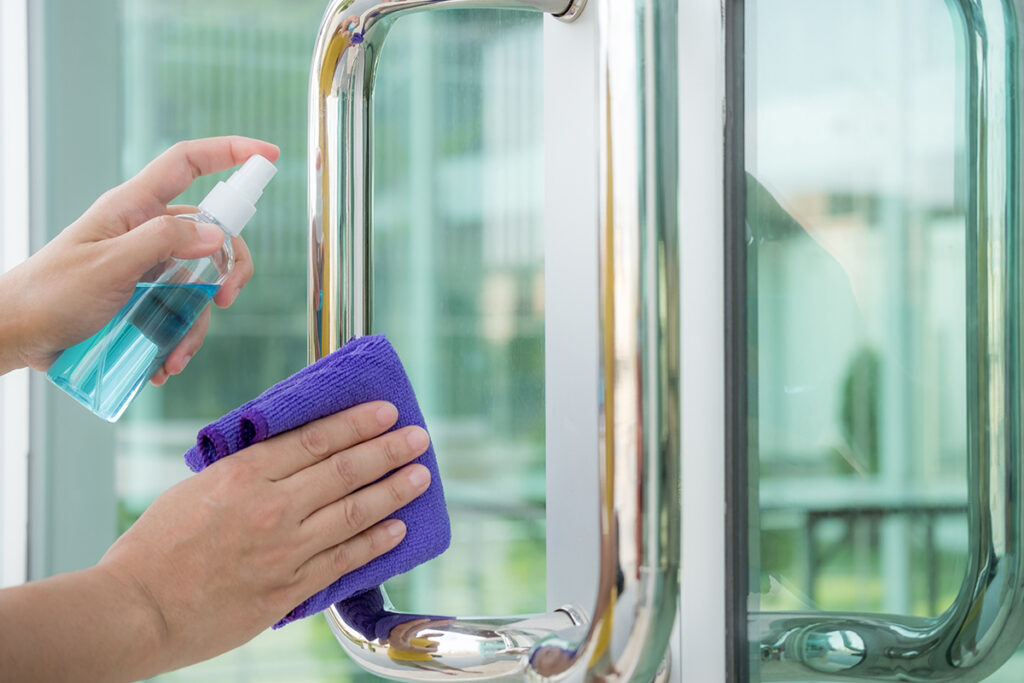 That’s why the University of Central Florida is co-developing a new, rapid-acting, long-lasting disinfectant spray that instantly kills viruses without using harsh chemicals.

The project is led by Christina Drake, a materials science engineer and owner of Orlando-based Kismet Technologies, Ltd., and includes UCF Department of Materials Science and Engineering Chair and Professor Sudipta Seal and UCF Burnett School of Biomedical Sciences director and Professor Griffith Parks. The National Science Foundation recently awarded a more than $250,000 grant to the team to advance the project.

Kismet Technologies is a research and development technology company that specializes in the ideation and creation of engineered materials and sensors for use in defense, health technologies, and automotive safety.

“Spray and wiped-based disinfectants require a surface to stay wet, usually on the order of minutes, in order to get to the 99.9 percent killing of viruses and germs,” Drake says. “We are creating a rapid-acting disinfectant spray that will disinfect faster than current disinfectants and that leaves behind a temporary, yet continually, disinfecting film post application.”

The transparent film is not sticky and will not be obvious when applied to a surface due to the nanoscale size of the disinfecting particles it contains, Drake says. It is planned to continuously sanitize because of the regenerative nature of the nanoparticles.

Drake got the idea for the spray while grocery shopping during the early days of the pandemic. She noticed an employee spraying disinfectant on a surface, but then immediately drying it, thus eliminating the spray’s effectiveness.

“I realized that was a real pitfall of disinfectants,” Drake says. “Leaving surfaces wet for minutes in high traffic areas, while people are present and shopping, is just not practical.”

Afterward, Drake reached out to Seal, her doctoral advisor during her graduate studies at UCF, to start developing ideas. Parks, who is also working with Seal to develop a virus-destroying face shield material, joined the team to bring his virology expertise to the project.

The disinfectant they are developing works by using cerium oxide nanoparticles developed by Seal, which prior research indicates could be lethal to viruses similar to SARS-CoV-2, the virus that causes COVID-19 disease.

Cerium oxide nanoparticles have been shown to have a wide range of therapeutic properties from healing diabetic wounds, to reducing harm from radiation, helping kill cancer cells and working as an antibiotic. The nanoparticles have a unique ability to act as a powerful antioxidant in healthy human cells and also to generate protective hydroxyl radicals to defend against pathogens.

“We’ve been working on using these nanoparticles to kill cancer cells and other things, and we thought, why not create a separate formulation that can hopefully deactivate the virus in the same way, using its redox ability,” Seal says.

The approach is novel because of the multiple disinfecting mechanisms that are built into the nanoparticles and because they will be incorporated into a formulation that allows a temporary, disinfectant film to form.

The researchers are actively working to synthesize initial formulations that Parks will test on a panel of different viruses, including coronaviruses related to SARS-CoV-2.

“I’m very excited to be a part of this terrific multi-discipline team of scientists addressing an important question in safety,” Parks says.

The disinfectant spray could be sent to the U.S. Environmental Protection Agency for approval at the end of the one-year project, after which it could appear on the market, the researchers say.

Seal joined UCF’s Department of Materials Science and Engineering, which is part of UCF’s College of Engineering and Computer Science, in 1997. He has an appointment at the College of Medicine and is a member of UCF’s prosthetics Cluster Biionix. He is the former director of UCF’s Nanoscience Technology Center and Advanced Materials Processing Analysis Center. He received his doctorate in materials engineering with a minor in biochemistry from the University of Wisconsin and was a postdoctoral fellow at the Lawrence Berkeley National Laboratory at the University of California Berkeley.

Parks is the College of Medicine’s associate dean for research. He came to UCF in 2014 as director of the Burnett School of Biomedical Sciences after 20 years at the Wake Forest School of Medicine, where he was a professor and chairman of the Department of Microbiology and Immunology. He earned his doctorate in biochemistry at the University of Wisconsin and was an American Cancer Society Fellow at Northwestern University.