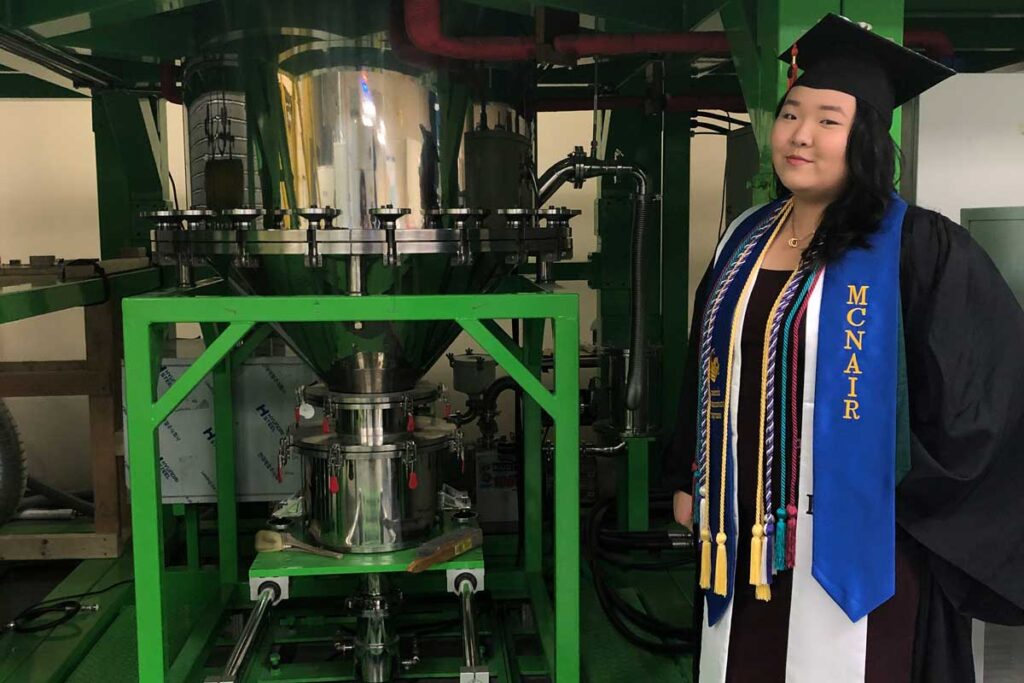 Sharon Park ’19 ’20MS is one of 1,700 UCF graduates expected to return to campus for the in-person milestone they missed in 2020. Her reason for coming home illustrates precisely why it matters.

This weekend, Sharon Park ’19 ’20MS is traveling 900 miles for what will appear to outsiders to be a five-second walk across the stage at Addition Financial Arena.

Like the rest of the 1,700 participating graduates expected to attend this special commencement celebration, Park completed the requirements for her degree in 2020, but the Florida Board of Governors required all of Florida’s state universities last year to hold virtual commencement ceremonies due to the COVID-19 pandemic.

“Honestly, I thought the university talked about a make-up ceremony last year because they didn’t have the heart to say ‘canceled,’ ” says Park, who earned a master’s degree in materials science and engineering.

Many graduates from the spring, summer and fall classes of 2020 shared her skepticism and went on with their lives and careers. Park moved to Baltimore to begin her doctoral research at Johns Hopkins. A year passed. Then an unexpected email hit her inbox announcing the opportunity for UCF’s 2020 graduates to reserve a spot in the arena for an in-person ceremony. Appropriately, it would be held on the Friday of Homecoming weekend.

“At first I had to think about leaving my research team at Johns Hopkins,” says Park, “but then I thought about my parents.”

Making the Most of an Opportunity

Every returning graduate has a personal reason for coming back to UCF for that brief moment on stage.

Park and her younger sister, Yuri, grew up in Apopka. Park remembers her mother not being at the breakfast table on most mornings. After school she and Yuri would go directly to their father’s dojang, where he taught taekwondo. Park would complete her homework in the dojang, train with her dad and ride home with him. It became her daily routine.

“I didn’t completely understand why my mom was gone for so many hours every day,” says Park.

She also wondered why her mother stressed academics so much.

“Mom helped with my schoolwork as much as she could after dinner. I could tell our education meant a lot to her.”

Park’s prowess in math and science grew so rapidly that eventually her mother could only offer encouragement, while her dad instilled the focus and discipline of taekwondo. Park used every bit of it to excel. She was accepted into UCF’s mechanical engineering program and earned a spot in the McNair Scholars Program, which provided a path toward post-graduate work.

In addition to learning about formulas and equations, Park developed an ability to think critically during her undergraduate education, and she began to finally realize something about her parents. She’d known the basic facts: that her mom and dad immigrated from South Korea in the early 1990s, as Park says, “for the reason any immigrant does, because they saw the U.S. as the land of opportunity.” With a changed perspective at UCF, she also appreciated what they’d left.

“They sacrificed everything they’d known in Korea: their jobs. Their relationships. Their language,” she says. “They literally had to start over when they came to the U.S.”

In the past 20 years, South Korea has rapidly developed both socially and economically. But when Hyun and Mi Young Park lived there, they faced limitations. They grew up in impoverished communities and had limited access to higher education. At that time, just one in three high school graduates in Korea went to college. As recently as 2009, 50% of the women in the country were employed, and 6% had either enrolled in, or completed, graduate school.

This explained why Mi Young pulled such long hours at a beauty-supply store and why Park and her sister spent so much time in the dojang. The land of opportunity wasn’t just for mom and dad.

“They wanted to make sure my sister and I could have what they never had growing up — the best education possible,” Park says. “Now I realize that’s all they thought about.”

Park received her bachelor’s degree in mechanical engineering at a UCF graduation ceremony in 2019. She knew it would be emotional for Hyun and Mi Young to see their daughter walk across the stage — representing the concept of opportunity being transformed into reality.

“I wanted that moment so badly for them,” Park says.

In the days leading up to commencement, though, her grandmother became severely ill. Hyun, Mi Young, and Yuri had to fly to South Korea. Park walked alone at graduation before joining the family for her grandmother’s final weeks.

“That was a very emotional time for reasons we didn’t anticipate,” she says.

For the next 18 months, she poured her focus and discipline into master’s studies in materials science and engineering. She became the first in her family’s lineage to earn a postgraduate degree, while also earning UCF’s Order of Pegasus — the most prestigious and significant award a student can attain at the university — which would reserve her a seat in the first row at the August 2020 graduation ceremony.

“That part of graduation was going to be a surprise for my parents.”

The surprise turned to another disappointment when COVID-19 forced the ceremony to be postponed with no guarantee of when a make-up ceremony would be scheduled. A few weeks later, Park left to begin her research on materials used to build aircraft and spacecraft at Johns Hopkins.

“It’s better than I thought it would be,” she says. “I’m working in a lab with scientists who are motivating me to be a better researcher and a better person.”

In fact, when she briefly contemplated whether to return to UCF for graduation, her research team insisted that she go. They don’t even know Park’s whole family story.

“The ceremony is for mom and dad. I want them to know in my moment on stage that I’m saying, ‘I realize everything you did for Yuri and me. Now look. Your sacrifices were all worth it.’ ”

“I’m grateful to UCF for following through on a promise,” she says. “For me, I’m looking forward to my mom’s galbi-jjim [braised beef]. But the ceremony itself …” she pauses for a few seconds. “The ceremony is for mom and dad.

“I want them to know in my moment on stage that I’m saying, ‘I realize everything you did for Yuri and me. Now look. Your sacrifices were all worth it.’ ”