Biomedical sciences student Angela Shar is one of three UCF students who received the 2022 Goldwater Scholarship. One of Shar’s Goldwater mentors is Assistant Professor Mehdi Razavi who holds a joint appointment in the Department of Materials Science and Engineering.

The scholarship was founded in honor of former senator Barry Goldwater and is considers of the most prestigious scholarships for students studying engineering, natural science and mathematics. More than 5,000 students from 433 academic institutions were nominated but only 417 students were selected. 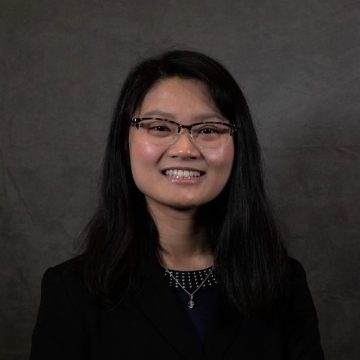 Angela Shar understands the nano-world more clearly than most of us understand the world in front of our faces. But when asked what drives her to excellence, the Goldwater recipient gives a surprising answer.

“Failure. That’s the result from 99% of research. The one time you have success is rare. That’s why I love it so much,” she says.

Shar has had different research projects underway since she was 11 years old, so she’s built quite an affection for failure. During the past three years at UCF, she’s been developing a platform to use nanobubbles under the control of ultrasound to help target osteoporosis in specific areas of the body. She once went 8-9 months with no solid results.

“When I finally saw nanobubbles targeting a pelvis, it was like an out of body experience,” she says. “This is what I appreciate about UCF. Students are allowed to try new ideas. When I’m in the lab, anything is possible”

Shar’s parents immigrated to the U.S. from Myanmar. They would take Angela and her brother on family trips back to Southeast Asia, in part to show them why they’re so appreciative of America. When she was seven years old, Shar went to an elementary school for children who were deaf and/or blind.

“In that moment I saw how resilient those kids were. It always stayed with me,” she says.

Resilience guides her in the lab, failures and all. She also tapped into that resilience a year ago when she applied for and didn’t receive a Goldwater Scholarship.

“I’m glad that I grew from it and tried again. The real prize is the community of scholars across the country,” Shar says. “We all understand the late nights in labs and the importance of failures. Without them, there would be no groundbreaking successes.”

Students interested in applying for the Goldwater Scholarship or other major national awards should contact the Office of Prestigious Awards at opa@ucf.edu.