The sensor will use terahertz waves to detect fire and chemicals whose unique molecular signatures can be determined based on how the waves interact with them. 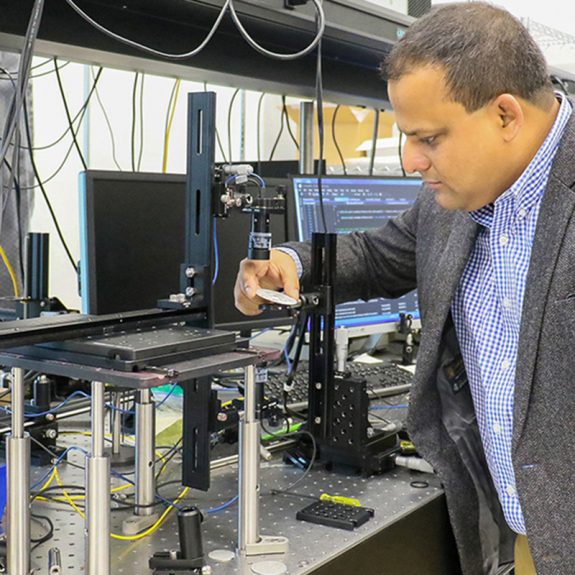 Kausik Mukhopadhyay, a senior lecturer and researcher at UCF’s Department of Materials Science and Engineering, is working to develop a sensor that remotely detects fires and dangerous chemicals.

The U.S. Department of Homeland Security is turning to the University of Central Florida to develop new technology to help keep first responders safe during potentially toxic fires.

It’s doing so with a new, $500,000 grant from the department’s Federal Emergency Management Agency, which will fund the development of a sensor that remotely detects fires and dangerous chemicals. It is the first FEMA fire prevention and safety grant UCF has received.

Kausik Mukhopadhyay, senior lecturer and researcher at UCF’s Department of Materials Science and Engineering and principal investigator for the project, will work with research and development organization, imec, to develop the sensor at its Kissimmee-based design center.

“There is an urgent need for cost-effective, portable detection systems that can quickly and quantitatively analyze toxic and dangerous gases mixed with unwanted aerosols, such as smoke soot, dust, mist, fog, and fumes,” Mukhopadhyay says.

The sensor will use terahertz waves to detect fire and chemicals whose unique molecular signatures can be determined based on how the waves interact with them.

Terahertz is a range on the electromagnetic spectrum located between microwaves and infrared radiation. There is a lack of availability of terahertz sensors and detectors, Mukhopadhyay says.

“Precise sensing and selective detection of hazardous, toxic, or flammable gas in the smoke is important to avoid the secondary disaster in the fire accidents for the victims and firefighters,” Mukhopadhyay says.

The goal is for the sensor to detect fires remotely at an early smoldering stage before conventional sensors can be used.

“Equally important is to precisely image hidden fires underneath the smoke, so we can douse such fires, saving lives and resources, and stop its propagation as fast as possible,” the researcher says.

Current sensors are bulkier, expensive, and not as sensitive as the ones that will be developed as part of this project.

Lei Zhang, a senior researcher at imec who is working on the project, said the organization’s silicon photonics technology will be used to help create a compact and low-cost terahertz emitter and detector, which will be used to build portable terahertz gas sensors for fire detection.

“Over 3 million acres have burned every year since 1999, and the acreage burned each year is increasing from more than 60,000 wildfires occurring in the United States each year,” Mukhopadhyay says.

“While the victims and responders tend to focus on the immediate effects of a fire, the ripple effects that flow from these events, ranging from the enormous respiratory and cardiac effects from the plumes of smoke, to the aftermath of the toxic chemicals, create enormous burdens for firefighters and first responders,” he says.

The researcher says he expects the module developed at the end of the project will be easy to carry or maneuver by retrofitting it to robotic arms or to aerial, sea or land vehicles to detect smoldering or hidden fires, toxic gases and organics, thereby protecting lives and health of the civilians, firefighters, farm animals and victims during fires or explosions.

The work is part of an overall expansion of UCF’s efforts to help first responders safely deal with emergencies. For instance, a sensor for first responders and military personnel to detect dangerous, airborne opioids, such as fentanyl and carfentanil, as well as toxins released in fires or explosions, is being developed by Subith Vasu, an associate professor in UCF’s Department of Mechanical and Aerospace Engineering, under a grant from the Defense Advanced Research Projects Agency.

Mukhopadhyay received his doctorate in chemistry from the National Chemical Laboratory in India and worked as a postdoctoral researcher at Michigan State University and the University of North Carolina. Prior to joining UCF in 2017, Mukhopadhyay worked for more than 10 years in industry, where he oversaw research and development, technology transition, product development and intellectual property from projects funded by the U.S. Department of Defense, NASA, the Office of the Secretary of Defense, and the Department of Energy totaling more than $6 million. His years of research and development experience include seminal contributions in developing catalytic nanomaterials, coating systems, military medicine, hemostatic formulations and antimicrobial bandages through 11 U.S. and international patents, and working with Fortune 500 companies.